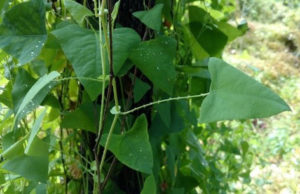 An invasive weed from eastern Asia has been found in Iowa for the first time.

“Its name implies it grows very rapidly and the stems of the plant and the leaf petioles have these little spines that make it very effective at climbing existing vegetation or structures that are in the area…and it’ll just pull down that existing vegetation,” Hartzler said.

The mile-a-minute weed has been a big problem in Pennsylvania and other mid-Atlantic states for decades, but until now, the only sighting of the invasive vine in the Midwest was in Indiana.

“It’s sort of unusual that it would bypass Illinois and show up here in Iowa,” Hartzler said. “But, we move so much material around nowadays that it’s easy for plants to get dispersed.” The mile-a-minute weed doesn’t present a big threat to farming in Iowa, according to Hartzler. 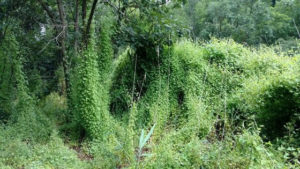 The weed grows quickly and takes over.

“It’s not a weed of intensely managed areas, so it’s not going to move into corn or soybean fields…it hasn’t shown that ability,” Hartzler said. “But, it is a big problem in gardens, edges of woodlands, and so forth.”

A Marion County landowner, who Hartzler described as a “serious gardener,” reported the vine on his property.

“He said he’s been trying to fight this weed for three years and he just felt he was losing the battle,” Hartzler said. The mile-a-minute weed is an annual vine that can grow up to 20 feet long and has light green, triangular leaves. It also produces small blue berries. Hartzler wants Iowans who suspect they have an infestation of the weed to report it to him or the Iowa Department of Agriculture.

“This is such a unique-looking weed, it doesn’t blend in with other plants and landscape, so I think it should be fairly easy for people to find,” Hartzler said. There was no evidence of other infestations of the weed in the surrounding area of Marion County, according to Hartzler.