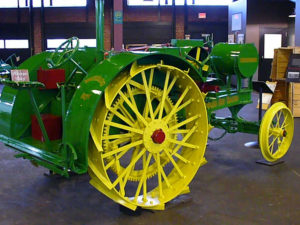 “The wheels are so open and exposed with the spokes and the gears and I really want that to shine through and not get bulky and clunky with a lot of structure,” Pratt says. “That’s been a challenge, to design something that will hold up, hold the butter weight, without getting in the way of the butter.” As a 14-year-old 4H member, Pratt learned how to sculpt from Norma “Duffy” Lyon, Iowa’s “butter cow lady” and Pratt took over in 2006 when Lyon retired.

Also this year, the Illinois State Fair asked Pratt to create something unique for that state’s bicentennial, but she can’t reveal what it is before the unveiling at the fairgrounds in Springfield. “After a tradition has been, like the state of Illinois, for 200 years and the tradition of having butter sculptures in Illinois for over 90 years now, a lot of ideas have been done,” Pratt says. “It’s a mix between what’s fresh and what’s traditional.”

Butter sculpting is a family affair in the Pratt household. Her dad, brother and husband help out by welding the frame together. Environmentalists and sanitarians will be happy to know the butter is recycled. “Each fair has their own stock of butter that’s been donated by a local dairy producer,” Pratt says. “The cooler gets warmed up just a little bit, softens it, and then it gets scraped down, packed into the buckets really firm to leave out any air and moisture and then it gets frozen — until the next fair and then it starts all over again.”

The Iowa State Fair worked with Deere which sent Pratt photographs of the 1918 Waterloo Boy. She also visited the John Deere Tractor and Engine Museum in Waterloo to study the iconic tractor. At the Iowa State Fair, which opens Thursday, Pratt will answer questions and put the finishing touches on her butter sculptures — the tractor and a cow. She’ll have to complete her works of art for the Illinois State Fair before opening day, which is also Thursday.