You are here: Home / News / Fireworks professionals focus on safety at convention in Mason City 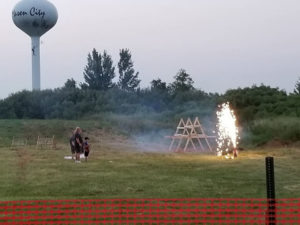 The Pyrotechnics Guild International is holding its convention in Mason City.

The Fourth of July is long past but the nighttime skies over Mason City are bursting with fireworks.

The annual convention of the Pyrotechnics Guild International is underway at the North Iowa Events Center. PGI president Paul Smith says Mason City has been a great host of the convention in the past and that’s why the organization is back again this year.

“The folks here really work well with us,” Smith says. “The community has been very helpful to us and attended the public displays well. The general situation is good geographically because our members can have good access to it and overall, the sites work well for us.”

Smith says the whole week deals with people who are interested in making and displaying pyrotechnics. He adds, it’s not just about shooting off the fireworks, it’s about educating members.

“Public displays is one aspect, our shooting of fireworks, the individual members can shoot here and there’s all sorts of educational things that go on,” Smith says. “It helps to accomplish our mission, which is a focus on fireworks and their use, doing it safely and how they can be of great entertainment value and of educational value.”

Many of the fireworks lighting up the evening skies in Mason City won’t be seen anywhere else in the world. “Some of the reasons some of the things are so unique is because in the last 50 years, there’s been a whole science, a focus on that,” Smith says. “Previous to that, it was all trial and error and figuring out how things work. Now, we understand the chemistry and how to adjust that to get this particular effect.”

Mason City is hosting the convention for the fourth time, following previous events in 2005, 2009 and 2014. Last night’s public display at the North Iowa Events Center was postponed to tonight due to the weather. More public displays are scheduled for Tuesday and Friday nights. For ticket information, head to visitmasoncityiowa.com.