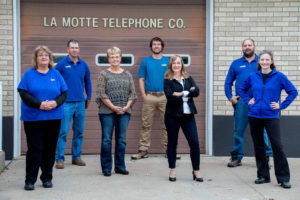 The La Motte Telephone Company has won an SBA loan to install fiber.

A tiny town in eastern Iowa’s Jackson County is the beneficiary of a more than $2.7 million loan from the U.S. Department of Agriculture.

The loan is going to the La Motte Telephone Company. General Manager JoAnne Gregorich says the money will be used to install 71 miles of underground fiber-optic cable around the town of Andrew.

“Once the main line cable is buried, then we will go and plow individual drops to each customer’s home,” Gregorich said. The project will result in higher-speed broadband internet for the roughly 400 people who live in Andrew. The construction work is extremely expensive, and without the USDA loan, it wouldn’t be possible.

“In the big city, you can go down a city block and serve I don’t even know how many people…15 maybe? In a rural area, we might have to plow a mile, two miles, or three miles between customers,” Gregorich said.

The loan for Andrew, Iowa was announced last week as part of a U.S.D.A. investment of $97 million in 12 rural broadband projects in 11 states.