You are here: Home / Health / Medicine / Iowan who got Cyclospora from salad sues 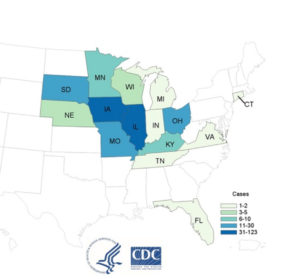 An Iowa woman is part of one of the first Cyclospora outbreak lawsuits against the company that supplied salads to McDonalds.

Kellie McCall lives in Monona County and says she got sick in June of this year and began having diarrhea, stomach cramps, fever, and severe gas within 14 days of eating a McDonald’s salad she bought in Onawa.

She says she was forced to see emergency medical attention at Burgess Hospital in Onawa. Attorney William Marler of the Marler-Clark Law Firm is representing McCall and around two dozen others.

He says the CDC was able to find Cyclospora in an unopened container of Fresh Express salad, so the CDC and the FDA where able to link the Cyclospora to the salad kids sold at McDonalds. There are 395 confirmed cases across 15 states, with 87 of the case in Iowa. Sixteen people have been hospitalized.

“They haven’t figured out if it’s the carrots in it or the romaine lettuce, but the product tested positive for the parasite before it got to McDonalds,” Marler says. “So, even though technically I could have sued McDonalds — the real entity here who had the last best chance to make sure there wasn’t a parasite in your food was Fresh Express.”

Fresh Express is a Delaware corporation that operates mainly out of Windermere, Florida. “We are asking them to compensate them for their medical bills, lost wages, and the pain and suffering for having this parasite in your body,” Marler says. Marler says this was not a simple one or two-day illness.

“Some of these people were sick for several weeks. It’s a hard bug to get rid of, they use a very powerful antibiotic to actually kill the bug, which is almost as difficult on your body as the parasite is,” Marler says. “So, a lot of these people have taken a long time to recover.”

Marler believes this is a case of not following through with the food safety law requirements to make sure the Cyclospora was not in the salad ingredients.

“The law exists, it’s really just getting the companies to really implement them. If there is a failure of government here, it’s not having enough inspectors to inspect products that are brought in from outside the United States. We are probably maybe only inspecting one or two percent of the produce that comes in, and I think most people would find that pretty unacceptable,” Marler says.

He thinks his case is strong against the company. “There are people who tested positive for this parasite and it’s been found in the food. There’s not a lot of argument that Fresh Express could have that this thing didn’t happen,” Marler says. “Hopefully they will see the writing on the wall and take care of my clients and the hundreds of other people who were sickened.”

The court filing says McCall had to have more treatment after initially going to the emergency room and being diagnosed with Cyclospora. It also says she lost considerable income due to the sickness. Des Moines Attorney Steven Wandro is working with Marler Clark, which is based in Seattle.