You are here: Home / Human Interest / McElroy Auditorium gets new name taking the Waterloo venue back in history 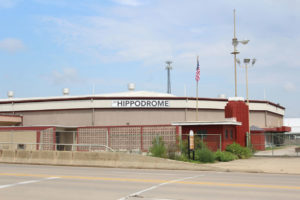 A new sign is now attached to a century-old arena on the National Cattle Congress Fairgrounds in Waterloo. McElroy Auditorium quietly underwent a name change last week and is now called The Hippodrome.

“We wanted to bring the arena back to its old roots,” says Jim Koch, co-manager of the fairgrounds. “If you Google ‘Hippodrome Waterloo’, (the search) comes to this building from year’s ago and brings up all kinds of old photos and everything.”

The name isn’t new. It’s the original moniker attached to the building when it first opened in 1919. The arena has been known as McElroy Auditorium since the around 1965. There is no known documentation to clarify the exact year when the name was changed to honor R.J. McElroy. He was a prominent Waterloo broadcaster and philanthropist who died unexpectedly that year at the age of 56.

Koch says he’s getting positive feedback from those who have noticed the unannounced name change.

“It’s like, ‘oh, that’s cool’,” Koch said. “That’s all it is. We’re not trying to offend anybody. We’re just bringing back the historical name.”

The National Cattle Congress Board of Directors recently approved the name change, although Koch admits the switch has been under consideration for about five years.

The Hippodrome, which turns 100 years old next year, is a member of the the Iowa Rock and Roll Hall of Fame. The iconic venue has hosted some the nation’s biggest stars over the years, including Buddy Holly, Johnny Cash, Loretta Lynn, Willie Nelson, KISS, Aerosmith, The Beach Boys, Garth Brooks, Blake Shelton, Destiny’s Child and Nelly.

On Feb. 20, 1984, President Ronald Reagan kicked off his re-election campaign at McElroy Auditorium. The arena was the original home of the Waterloo Black Hawks hockey team for 33 years. The Waterloo Hawks, one of the original NBA teams and the only sports franchise ever based in Iowa from any of the current Big Four professional leagues, also played home games at the historic arena from 1948 to 1951.