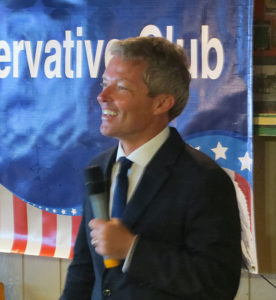 Eric Branstad, the state director for Donald Trump’s 2016 presidential campaign, is signalling he will likely manage Trump’s 2020 reelection campaign in Iowa. Branstad is the oldest son of Terry Branstad, the former Iowa governor who is now U.S. Ambassador to China.

“When dad was in the Oval Office a few weeks ago, he said that the president asked if I would do Iowa in 2020 and dad said he couldn’t answer for me, but he was sure that if I was asked by (Trump), I would do it,” Eric Branstad said earlier today. “…Dad is likely right.”

Branstad said he’s been to Trump Tower recently to discuss the 2020 campaign. Branstad spoke at the Westside Conservative Club in Urbandale, sharing details of his work on Trump’s 2016 campaign. Trump finished ahead of Hillary Clinton here by 9.5 percent.

“Every time I see the president, the number goes up a little bit…The last time I saw him, we won Iowa by 11, so I don’t correct him,” Branstad said, laughing along with the crowd. “…Now, I just have to make sure we win by even more in 2020.”

Branstad first met Trump in person on April 8, 2015, when Branstad was lobbying for the renewable fuels industry and asking all the presidential candidates to support ethanol. Branstad’s wife delivered a speech on behalf of New Jersey Governor Chris Christie when the couple attended their 2016 precinct caucus, while Eric Branstad spoke for Trump.

“There’s a lot of reasons why I supported him early and I why became, and still am, such a passioante fan. I was so tired of all of the political talk…It was such a refresh for me to have a candidate that actually answered the questions…that wasn’t focused on what the polling said or what his donors thought,” Branstad said, “because he didn’t care.”

In May of 2016, Branstad was hired as Trump’s state director for the General Election. Branstad said at the end of September, 2016 he was secretly dispatched to Wisconsin so as not to signal the campaign thought it had Iowa won. Branstad said the best advice he got was from a former Wisconsin governor, who suggested Trump hold a rally in Minneapolis right before the Election, to boost turn-out in western Wisconsin.

“I remember the media all saying: ‘Ha, ha, ha. Does (Trump) think he’s going to win Minnesota?’…Mocking us and laughing at us, when certainly, as you all know now, that wasn’t the intent,” Branstad said. “It was to do well in Wisconsin and we sure did.”

Branstad served a year in the Trump Administration as a top aide in the Commerce Department before resigning in early 2017 and returning to Iowa. Branstad said his life “has been a complete whirlwind” since he joined the Trump campaign in mid-2016.