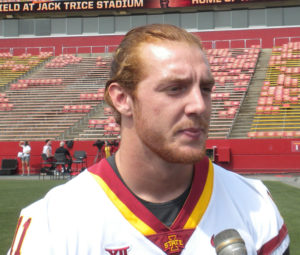 The Missouri native joined the Cyclones in Matt Campbell’s first year as head coach as Campbell was looking to bolster the tight end position. He caught nine passes as a redshirt freshmen and was named second team All Big 12.

“It’s one of the main reasons I came here, I knew coach Campbell used his tight ends very well at Toledo. And now that we’ve had a chance to mature as a position group, were very excited for this year and the other years going forward,” Allen says. 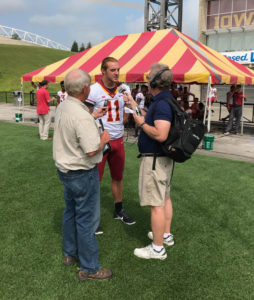 With a year under his belt Allen feels good about the upcoming season. “I think it’s just a lot of confidence, myself and Dylan Soehnor, now we both have a full year under our belts — we consider ourselves veterans now and we can do more things now, we are not a liability to the offense and we can make impacts,” according to Allen.

Allen says they have been getting a lot of encouragement from the receivers as they become an even bigger part of the offense this season.

Allen is the son of former Northern Iowa head coach and Cyclone assistant Terry Allen and still seeks input from his father. “He’s around a lot now, he’s up here, he’s been in the offensive staff room with the guys. It’s just good to get more input because (with) 20 plus years of head coaching experience under his belt, I’m sure he I’ll take all the advice I can get,” Allen says.