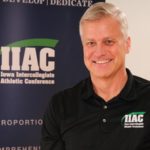 It was formed in 1922 as the Iowa Intercollegiate Athletic Association and the Iowa Conference has changed its name to the American Rivers Conference. The division three conference includes eight schools in the state of Iowa.

“This is a milestone day for our conference,” said Dr. Joshua Merchant, President of Buena Vista University and Chair of the conference’s Presidents Council. “Our name will change, but our commitment to competitive athletics as part of a well-rounded educational experience will not.” 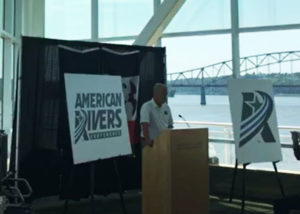 The conference employed Skye Design Studios, a national leader in sport branding and identity design, for the various phases of the exercise that produced the new name and “Dynamic R”-focused mark. “I am honored, on behalf of the Presidents Council, to bring this new identity to the conference’s community of student-athletes, coaches, administrators, alumni and fans,” said commissioner Chuck Yrigoyen. “This announcement caps off months of careful thought by scores of people on our campuses.”

The Conference’s origin dates back to December 8, 1922, when representatives from 12 colleges gathered to establish the “Iowa Intercollegiate Athletic Association.” Charter members Buena Vista, Central, Luther and Simpson have remained throughout. Loras was a member from 1926-54 and rejoined in 1986. Dubuque joined in 1929. Wartburg joined in 1937. Coe became a member in 1997. Nebraska Wesleyan gained admission in 2016.