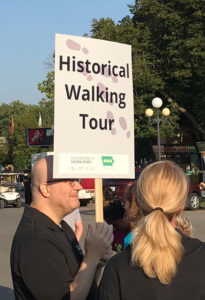 The 11-day run of the Iowa State Fair opened this morning and for the fifth straight year, the Iowa Department of Cultural Affairs hosted a walking tour showcasing the history of the fair, which dates back to 1886.

Jane Brickey participated in the tour. The 71-year-old from Des Moines believes she has attended the fair for 50 consecutive years. “It’s getting harder and harder to find something I’ve never done before and I try to find one thing new each year to do, so I decided this is my new thing this year,” Brickey said.

State Historical Museum curator Leo Landis helped lead the tour, which included a stop at the 4H Building. Decades ago, it was known as the Poultry Building. In 1962, the fair board decided to move the poultry show out of the building.

“The poultry producers were not happy about it, but they were able to bring a show back in ’63, just not in that building,” Landis explained. “Since 1965, that’s been where 4H exhibitions have been held…both demonstrations and displays.” People who took part in the walking tour also learned about how trolleys used to bring people to the fairgrounds.