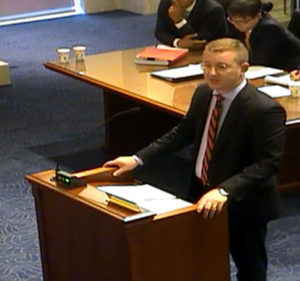 The Iowa Supreme Court heard oral arguments this morning on the Secretary of State’s request to remove temporary injunction that has blocked parts of Iowa’s new voting law.

The League of United Latin American Citizens challenged the constitutionality of three provisions of the law. One of the provisions is the requirement that a ballot can be rejected if signatures are checked and don’t match.

The attorney for the state, Thomas Ogden, says there have always been safeguards in place like this. “The provision at issue that allows the canvassing board to reject a defective ballot has been law for more than 10 years. The only thing that was added to it was this signature provision,” Ogden says. Ogden says it only becomes a concern when someone waits until the last minute to vote.

“The fact of the matter is that you have this entire period in which to send it in that you are able to cure. And if you wait until the very end, you are taking the risk that you may not have that chance. And that includes any defect — not just the signature matching,” Ogden says.

LULAC also challenge the move to cut the early voting period from 40 to 30 days, saying it suppressed voter numbers. Ogden says the shorter period did not have any impact on the number of recent primary voters. “We have data that we’ve put in through our affidavit about absentee voting. And they’re relying on this idea that these laws are disenfranchising droves of absentee voters, and the data simply shows that that is not the case,” Ogden says, “we had record turnout for absentee voting.”

Ogden says even after dropping to 30 days, Iowa’s voting period is still one of the longest. “I think that the legislature could have concluded frankly that 40 days is too many,” according to Ogden. “For many elections the debate process hasn’t started that early. There may be information that comes out to late — such as the unfortunate incident that we had in our Democratic Gubernatorial Primary this year — and we don’t really have a mechanism for people to change their vote once they have submitted an absentee ballot.” 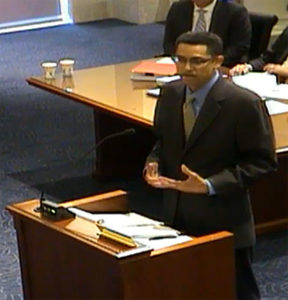 LULAC attorney Bruce Spiva says the changes hurt the organization as they had to spend more money to get people out to vote. “In order to get its constituency and its membership out to vote and make sure that their vote is counted, they having to expend all kinds of resources and energy, which is diverted from other activities,” Spiva says.

Justice Thomas Waterman asked Spiva why the group why the group didn’t file a lawsuit as soon as the law changed in January, and says it has caused issues for auditors. “There’s a lot of scrambling going on and confusion because of the late nature of this challenge,” Waterman says. Spiva replied that waiting to file the lawsuit was not a tactic on the group’s part, as he says they would have preferred to be in court earlier. He says having the funds to file the lawsuit was one of the reasons they didn’t act sooner.

Spiva was asked if the group would have sued in the early voting period had been 50 days and cut back to 40. He says he wouldn’t expect the concern to extend in that case, and says it is more of what voters have been used to for the early voting period. “Iowa’s been operating under a system of 40 days since 2003 and a lot of voters have come to rely on that 40-day period. In fact so many, that in 2016, 88,000 people voted in those 11 days,” Spiva says. Spiva was asked there was any evidence that the change suppressed the vote in the June primary election.

“No you honor is the direct answer,” Spiva says, “buy I think you can’t draw any conclusions from aggregate turnout in a single election. We are not really here talking about the aggregate turnout and whether the turnout will go up or down.” He says they are arguing that 88,000 people voted in the 11-day period relied on the time and the state pulled it away from them.

Chief Justice Mark Cady says they understand this is an important case that needs a quick answer and they will try to do deliver one.