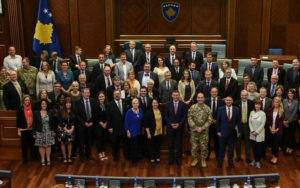 Officials in the Des Moines suburb of Norwalk will host a delegation from their sister city in Kosovo next week.

Norwalk economic development director Hollie Askey says four elected officials from the town of Vushtrri are in the group as well as three generals from the Kososo Security Force. A busy week of activities is planned, including trips to the Iowa State Fair and an Iowa Cubs game.

“Tours of the downtown, the capital, the Supreme Court building, Terrace Hill,” Askey says. “We’ll have a private showing of the movie, ‘With A Cup of Sugar,’ and then we’ll have a big night, Thursday the 16th, where we’ll do a Kosovo flag raising ceremony at City Hall, followed by a public reception at Warrior Run Golf Course.”

That film chronicles the relationship between Kosovo and Iowa. It dates back to 2011 with a partnership between the Iowa National Guard and the Kosovo Security Force. One goal of this visit is to broaden that partnership by establishing global trade opportunities.

“We have a lot of similarities in our industry and business climate and we have a lot of ways to connect our businesses,” Askey says. “That’s really our primary purpose, besides connecting and sharing with educational opportunities and cultural opportunities, but really with our business and trade industry, we feel like several of our companies can connect and expand.”

Askey was among four Norwalk leaders who were a part of the Iowa delegation that went to Kosovo in May, and this will be the first sister city visit to Norwalk for officials from Vushtrri. “They have so much love for Americans and they’re so appreciative of our help during the war and our help rebuilding their nation that they are so willing to do anything right now,” Askey says. “They even have a new industrial park program where they are offering free land and no property taxes to American businesses that want to build or expand there.”

Language shouldn’t create any barriers during the visit, as Askey says most Kosovars speak excellent English. The delegation from Vushtrri is scheduled to arrive on Sunday, departing next Friday, the 17th.