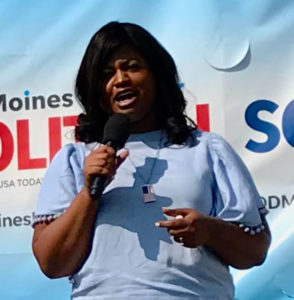 Deidre DeJear — the Democratic candidate for secretary of state — said she has steered clear of commenting on the court dispute over Iowa’s voter ID law because she didn’t want to confuse voters. DeJear said some of her campaign plans have been “on pause” — waiting for the Iowa Supreme Court to issue its ruling.

“Because we want to get people excited about voting,” DeJear told reporters shortly before the court’s ruling was issued. “We do countdowns and things of that nature that help to increase excitement.”

DeJear spoke at The Des Moines Register’s “Soapbox” at the Iowa State Fair today. She stressed election security and warned there are people who are trying to impede Iowa’s voting process. 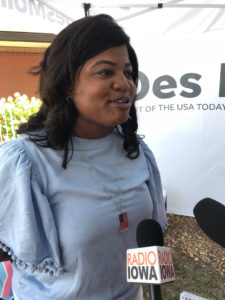 Deidre DeJear talks with reporters at the Iowa State Fair.

“How dare they do that? But the only way we’re going to fight against it is if that Secretary of State’s office takes it seriously and hires someone that is focused on securing our elections day in and day out,” DeJear said. “Because we know there are rooms of folks trying to figure out a way to hack into our systems on a daily basis, so we need to be defending ourself on a daily basis.”

DeJear said one of her top goals if she’s elected Iowa Secretary of State will be to get the 400-thousand Iowans who are eligible to vote registered to vote.

“We’re in a day and age where it shouldn’t matter if we’re Republicans, Democrats or Libertarians,” DeJear says. “Each and every one of us, if we are eligible to vote in the State of Iowa, we should be participating.”