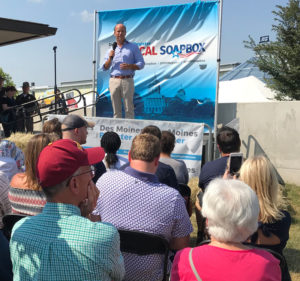 Maryland Congressman John Delaney announced he was running for president about a year ago and after he visits Carroll this weekend, he will have make a campaign stop in each Iowa county.

“On Sunday, we’re going to cross the finish line on our 99th county,” Delaney said. “…I think Democrats should campaign everywhere, right? There’s no reason why the message of the Democratic Party or at least the message we need going forward doesn’t sell in every district in this country.”

“What voters are looking for…(are) some fairly y basic things,” Delaney said. “…They want us to get real things done that make a different in their lives.” 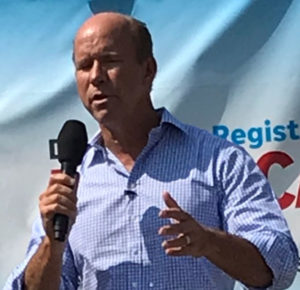 Delaney spoke late this morning at The Des Moines Registers’ Soapbox at the Iowa State Fair. Near the end of his speech, John Boehner, the former speaker of the U.S. House of Representatives, walked up to the outdoor venue. Boehner visited his friend Tom Latham (LAY-thum), the former Iowa congressman, last night and Boehner said he’s on his way to Omaha later today to help a Republican congressman there raise money.

Boehner told reporters his fellow Republicans “have their hands full” when it comes to keeping GOP control of the U.S. House and Boehner voiced concern about President Trump’s approach to international trade.

“I think I would do this a little differently. I always thought you caught more bees with honey than you do with vinegar,” Boehner said. “…Let’s get this issue resolved. Get to the table and get it resolved.”

Boehner said he doesn’t have a vote and will let Republican House members decide among themselves who should be their future leader. Current House Speaker Paul Ryan, who took over from Boehner, is not seeking reelection this fall.