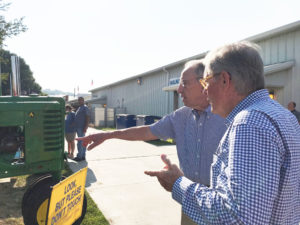 Iowa Senator Chuck Grassley points to a tractor while touring the fairgrounds.

Senator Chuck Grassley says the chairman of the Senate Ag Committee has assured him the 2018 Farm Bill will become law before year’s end.

“And I sure hope so, because I don’t want to do what we had to in 2013 — extend the Farm Bill for one year,” Grassley says, “because farmers need that continuity you get from a five-year Farm Bill and farmers also would (get) a bit of good news if they had a five-year Farm Bill, considering the anxiety they have about the tariffs.”

Iowa’s other U.S. Senator, Joni Ernst, is serving on the conference committee of House and Senate members that are trying to craft a final version of the bill that could pass both

Grassley has been touring the Iowa State Fairgrounds this morning, visiting with fairgoers.