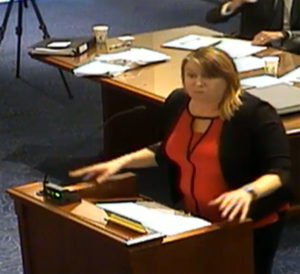 The justices of the Iowa Supreme Court heard arguments for and against the use of speed cameras in the capital city Thursday.

“The notice itself says judgment, it is ordered, judgment total is due, so forth and so on. And that’s — I mean it wasn’t a judgment of any kind — and then there’s an admonition bout ‘you might be referred to a collection agency’, my heavens,” Appel says. Mackel says the second page of the notice does explain the options available.

“Which very clearly states ‘you have the right to appeal this’ and gives very explicit instructions on how to do that and gets someone into that court process,” Mackel says. “And the reality is that people do that — so it’s not so mystifying that people don’t find themselves in the district court process.” The justices though suggested the overall notice was misleading to people about the process. 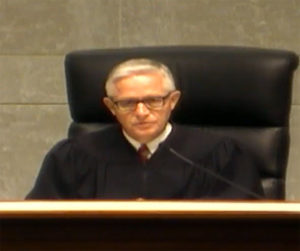 “I think the wording could have been — and if I could go back and rewrite the notice I certainly would have made it easier,” Mackel says. Chief Justice Mark Cady responded, “What should be require of government when people are faced with this choice and all they have is this notice? You can’t examine the law very carefully to try and sort this out either.”

Mackel was asked if the notice was written to funnel people to the easiest route to pay the fine instead of proceeding to the court process.

“I believe that this process is fair and appropriate and so encouraging people to go through that as opposed to coercing them, I don’t think is an inappropriate use of that notice,” Mackel says. “But if you have to go to the municipal infraction, the city has to pay the filing and court costs don’t they,” Justice Wiggins asked, and Mackel replied “yes.” 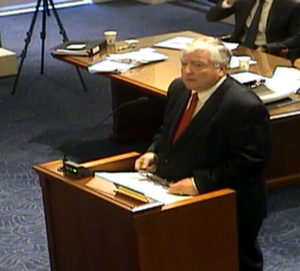 The attorney for those who got tickets, Jim Larew, says the notice pushes people to settle the issue without going to court.

“The original notice, called the notice of violation, instructs the recipient as to where to go if one wants to contest,” Larew says. “That’s a number that you call and the dialogue that Gatso provides its employee directs people to go to the administrative process,” Larew says. He says the notice is very confusing.

“It is almost impossible to say from what authority does this proceeding derive its ability to issue orders, to name its judgments as of the Iowa Supreme Court daring people to challenge it. From what authority is that created?,” Larew says. Larew says the city is using the cameras to make money and following the rules cost too much.

“What we think is, that the city having invented a municipal infraction process by ordinance consistent with Iowa law, found it to be inconvenient, found due process to be to expensive, wanted to have a high-velocity prosecution system,” according to Larew. Larew says the process used by Des Moines is a political safety valve that keeps local residents form getting too upset.

“It’s costly to have a system of municipal infractions enforcement that fully protects the rights of citizens. And if citizens aren’t willing to pay for that they have a way of expressing themselves politically. Except — and here’s the kicker — the way these are set up on interstate highways most of the people who get the tickets don’t reside in the local community and they have no way of expressing themselves politically to make that change,” Larew says. Larew says the exemption of semis is another reason why the Des Moines ordinance shows it is set up to make money and not for safety as the city contends.

“Hard to believe how you would classify and exempt semi trucks operating on the public highways and exempting them from an ordinance that was truly designed to enhance traffic safety,” Larew says. “That would defy the experience of most of the people who operate vehicles on our highways and experience the potential dangers of the big rigs as they move along.” The Iowa Supreme Court accepted new briefs in two other traffic camera cases from Cedar Rapids without hearing oral arguments in those cases. One of those cases involves a woman who says she was wrongly ticketed by an automated traffic camera on Interstate 380 in Cedar Rapids when she wasn’t speeding.