You are here: Home / Agriculture / Itty Bitty defies his name and wins the big boar competition 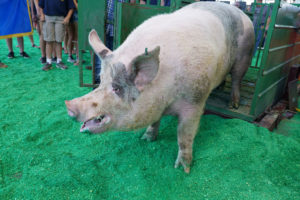 He’s anything but Itty Bitty, but that’s his name, and he’s the winner of the 2018 Iowa State Fair’s Big Boar Contest.

The ironically-named big pig weighed in at 1,163 pounds, just two more than runner-up Yo Yo.

Itty Bitty is owned by the West Delaware High School FFA chapter and many of the 44 members of the group were at the fair’s Swine Barn Thursday for the annual contest. They say their four-year-old pig’s favorite food is Iowa corn and he’ll often eat 16 pounds of it in a day.