You are here: Home / Agriculture / Iowa State Fair talk among farmers focuses on challenges in the field 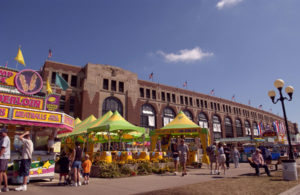 Farmers attending the Iowa State Fair are talking about the challenges they’ve faced this growing season.

Josh Nelson farms with his family near Belmond in north-central Iowa. He says they’ve probably lost about 10% of their corn and soybean crops to heavy rains and flooding. But otherwise, Nelson says, the crops look great.

“The yield potential is there for over 200 bushels per acre for a lot of our corn,” Nelson said. “Some of it’s not going to make it there, some of it was planted too late to even try to reach that level. But overall, I think we should be pretty happy and pretty thankful for the crop we have.” Jack Boyer, of Reinbeck in northeast Iowa, is planning for above-average yields on his corn.

“It really got off to a gangbuster start, I mean it’s probably two weeks early as far as maturity is concerned,” Boyer said. “Then, it cooled off a little bit so I’m hoping that’ll give it more time to fill in the kernels and the test weight will be a little higher. That’ll help if we can get that, kind of like we did last year.”

Boyer thinks his soybeans will be above-average as well. Condition ratings, statewide, for Iowa’s corn and soybean crops declined in this week’s report from the U.S.DA. The good-to- excellent rating on corn dropped three percentage points, to 75%, compared to last week. Soybeans were also down three points to 74%. Both crops were said to be running about a week ahead of average in their development.