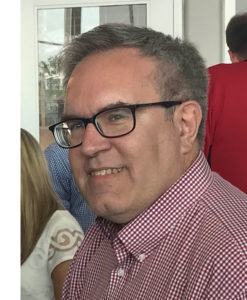 The U.S. Environmental Protection Agency’s acting administrator met privately with Iowa commodity group leaders at the Iowa State Fair today — but Andrew Wheeler told reporters afterwards there is no decision yet on regulations that would allow a higher blend of ethanol to be sold year-round.

“I can’t tell you the timeline,” Wheeler said late this afternoon. “We are mindful of needing to have a decision on that before the growing season next year.”

Wheeler seemed to indicate EPA guidelines that would approve the sale of E15 year-round would be coupled with some sort of accommodation for the oil industry.

“We’re certainly looking to see what we can do overall as a part of a larger effort to bring more certainty around the RFS and we’re open to that and I’ve been meeting with different groups around the country — different associations that represent the ethanol people, the refiners — trying to figure out what we can do ,” Wheeler said. 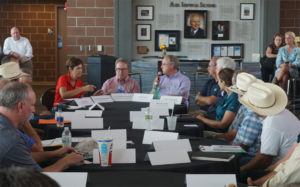 Congressman Young’s office sent out this picture of the roundtable with David Wheeler.

“The important thing is the Trump Administration wants to move forward with implementing the RFS (in) both the spirit and the letter of the law.”

The Renewable Fuels Standard was established by congress and requires the EPA to annually set a mandatory production level for ethanol and other biofuels. Republican Governor Kim Reynolds criticized previous EPA Administrator Scott Pruitt for granting waivers that let some oil refiners get around the federal ethanol mandate. Reynolds made the same point today as she stood next to the EPA’s acting director at a brief news conference.

“Fifteen million gallons needs to mean 15 million gallons and I think that’s the message that was delivered today in a very constructive manner,” Reynolds said “And that is something that the Adminsitration and EPA could weigh in on that would have an immediate impact on the price of corn and infuse some optimism and certainty into the market.” 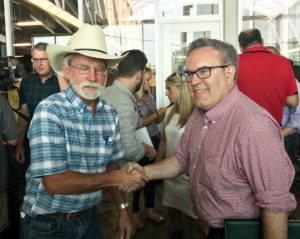 Iowa Farm Bureau president Craig Hill was among the few dozen ag-industry leaders who had a private discussion with Wheeler. Hill said the meeting was “constructive,” but the Iowans didn’t get the answers they were hoping for.

“It’s been Christmas for the oil industry on every one of these deals. Where’s our deal?” Hill said. “…We’ve not gotten a thing.”

Hill said farmers and the ethanol industry appreciate that the EPA has met the deadline for setting the federal production mandate for ethanol, but they’re frustrated the waivers granted to oil refineries has effectively reduced the mandated level of ethanol production.

Congressman David Young, a Republican from Van Meter, thanked Wheeler for being “accessible” and listening to Iowa farm groups who’ve been worried about EPA foot-dragging on ethanol-related issues.

“Because of what President Trump said in promising E15, thinking it was a fabulous idea, there’s an expectation that’s going to happen,” Young said.

Young told reporters if the EPA doesn’t figure out how to authorize the sale of E15 year-round, a bipartisan coalition in congress is working on legislation to make it happen.