You are here: Home / Crime / Courts / New website and advice on what to look for in search for Mollie Tibbetts 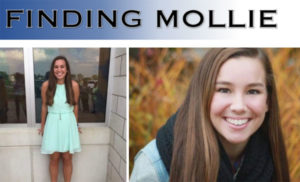 Investigators in the disappearance of Mollie Tibbetts of Brooklyn gave an update on the search for the missing University of Iowa student today.

Iowa Division of Criminal Investigation assistant director Mitch Mortvedt asked again for any information people may have in the case and says they have a new website where you can go if you know something. “It is possible that Mollie came into contact with someone who has caused her harm. This person may not be a member of our community — but likely has some familiarity with the area,” Mortvedt says.

Mortvedt asks anyone with any information to go to the website: findingmollie.iowa.gov to leave a tip. He also today asked everyone to be on the lookout for someone who may’ve started acting different on July 18th — the day Tibbetts was last seen. He says there are several things to look for. “Change in normal routine. Which might include missing school, work or routine engagements without plausible explanation,” Mortvedt says. “A vehicle unexpectedly taken to a repair shop or sold or disposed of. Unexpected or intensive cleaning of a vehicle, possibly at an unusual time of day or night. Unexplained lack of contact or inability to get in touch with someone you knew on the evening of July 18th into the morning of July 19th.”

Mortvedt says if you notice any of these things, you should report them. “We invite you to visit the site findingmollie.iowa.gov. “We hope that the visual aids placed up here today and on the webpage will take you back to Wednesday July 18th,” according to Mortvedt. ” We hope the locations highlighted will jog your memories and hope you to recall important details about that day.”
DCI Special Agent Richard Rahn took questions and was asked about the locations they have highlighted.

“No specific reasons for those certain areas, but we are hoping that people will look at the map — again — to help jog their memory, basically,” Rahn says. Rahn says they have not ruled anything out and he says they are still characterizing Tibbetts; disappearance as a missing persons case. He says the number of tips coming in has not dropped off since they started the investigation.

“We want to keep the investigation — protect the integrity of it. And so it is not something that we do with the DCI. We just don’t provide the information on the investigation as it is ongoing,”Rahn explains. “And so, that’s why we emphasize if they think they know something, certainly provide it to us,” Rhan says.

Rahn says it continues to be a joint investigation with state, local and federal officers and they will continue working with the same goal of finding Tibbetts.