You are here: Home / Outdoors / Search on to find the endangered rusty patched bumble bee in Iowa 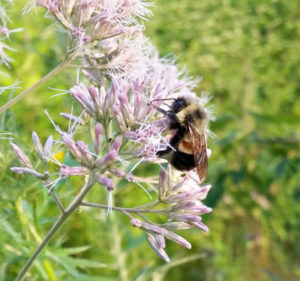 The rusty patched bumble bee was designated last year as “endangered” and teams are fanning out in Iowa to search out the insect and determine its status here.

Seth Moore, an environmental specialist with the Iowa Department of Natural Resources, says the bee’s population nationwide has plummeted by nearly 90% in the past two decades. Moore says, “That triggered our interest in wanting to find out where it’s at in Iowa, where we do have it and searching out new areas.”

The DNR is conducting a survey to identify locations around the state where the bee is still being found. So far, it’s been identified in seven Iowa counties. Moore says teams go out for about six hours a day, armed with butterfly nets and small glass vials, trying to carefully catch any bee they spot. “We put them in the vials to determine which one they are, if it’s a rusty patch or not,” Moore says. “A lot of the times, it’s not a rusty patch, it’s another bee, maybe the common eastern bumble bee or the brown-belted bumble bee, two of the more common ones you’ll see in Iowa.”

Once identified, the bees are released. “We also look for specific plants in the field that are flowering,” Moore says. “Wild bergamot or bee balm, that one of their favorite ones that they have during the year.” Bees also gravitate toward coneflowers and Joe Pye weed. Iowans can help the struggling bee populations by planting those varieties in their yards — and by minimizing the use of pesticides.

The bees  have been confirmed in counties across mostly eastern and central Iowa. They are: Allamakee, Black Hawk, Boone, Clayton, Jackson, Johnson and Winneshiek. Learn more at www.bumblebeewatch.org.