You are here: Home / Outdoors / State report finds 10% of public water systems had violations in 2017 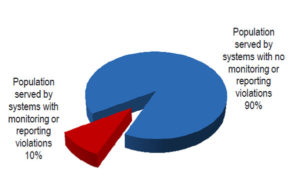 The DNR’s annual report finds a majority of water systems had no violations in 2017.

The annual report on state water systems shows there were not diseases or deaths caused by the water in the more than 18-hundred public water systems.

The Department of Natural Resources Diane Moles oversees the water section and says only 10 percent of the systems had violations last year. Moles says there was a change that took the discovery of choliform bacteria off the list of violations.

She says almost half of the violations in the past had been under that rule and just by virtue of reducing it, the numbers go down. Last year’s report had nine months under the new rule and this year all of it was under the new rule. Moles says the rule change requires system operators to take action.

“Rather than off the bat getting the violation, what happens now is that they are required to conduct an assessment of their system,” Mole says. “We have a couple page worksheet that they have to make sure that there isn’t anything that is problem. And they also do monitoring to verify that there isn’t a problem.” She says the biggest violations now involve no following through on the required processes. 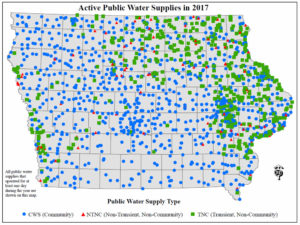 “They’re more treatment technique oriented where someone is supposed to have a certain level of chlorine and maybe they don’t have that level,” Moles says. Another issue is one that Moles says has been ongoing. “Last year we had 10 systems out of our 1,841 that had a nitrate maximum contaminant level violation,” according to Moles. She says the system operators are required to take action to reduce the nitrate levels. But as those systems are fixed, others pop up with issues.

Mole says the majority of water systems get their supply from wells. “Ninety-two percent of our over 1,800 systems are groundwater systems, and then the other eight percent are surface waters — such as reservoirs or rivers as the source — and then we have a category of influenced groundwater, which is a shallow groundwater well that is under the influence of surface water, usually a river,” Moles says.

But while a majority of the water systems get their supply from wells — Moles says the systems that use surface water are large ones and have the most customers — making up 55 percent of the Iowans who get water from a public system.

Moles says the number of public water systems continues of trend that has seen them drop in the last decade. She says this happens as more systems combine, or systems drop below the minimum number of customers. Mole says each system is required to send out an annual report and that is the best way for you to find out how any issues with your water.

“That’s where we first send people, is to the consumer confidence report, it’s also called the water quality report,” Moles says. “Every community system has to do that and provide that to their customers by July first of every year.” She encourages you to look over the report on your water system and call and ask them if you have any questions.

The DNR’s statewide report gives them an overview of the issues in the various systems. You can see that report here: http://www.iowadnr.gov/Environmental-Protection/Water-Quality/Water-Supply-Engineering/Annual-Compliance-Report