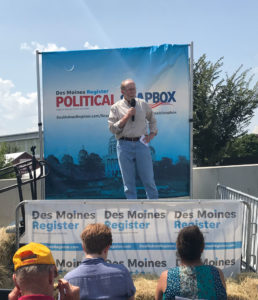 Congressman Dave Loebsack says Democratic candidates would do well to focus on local issues if the party hopes to capitalize on what might be a “blue wave” this November.

“Going forward, the best thing that the Democratic Party could do would be to recognize that the Midwest is not San Francisco, it’s not Long Island or Queens,” Loebsack says. “It’s completely different.”

Former House Speaker Nancy Pelosi is from San Francisco and the 28-year-old Democratic Socialist who beat a House Democratic Leader in a June Primary is from Queens. Loebsack says Democrats running for congress have to worry about their own districts.

“That’s what I tell folks in Washington, D.C. all the time, too,” Loebsack says. “They can come up with whatever them come up with, but I need to talk about the issues and respond to the folks in my district, what’s affecting them every day.”

In 2006, Loebsack beat a 30-year incumbent to win a seat in the U.S. House. There are three Democrats in Iowa running against Republican incumbent congressmen this year, but Loebsack is reluctant to suggest his campaign strategy 12 years ago would work for them.

“I really don’t give a Iot of advice to people because I really believe that those people running in those areas probably know their districts pretty well,” Loebsack says. “I think part of the problem with my party is that they talk about a message, they talk about issues and all the rest, but those are not the same around the rest of the country.”

Loebsack, a former Cornell College professor, is seeking a seventh term in the U.S. House. Loebsack says Democrats “have real opportunities” in 2018, but he’s not going to guess whether Democrats can win enough seats to take control of the U.S. House from Republicans.

Loebsack spoke with reporters this afternoon following his speech on The Des Moines Register’s Soapbox at the Iowa State Fair.