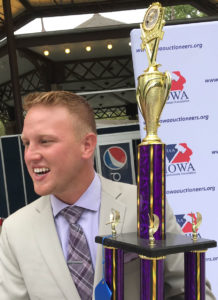 A 24-year-old from Lincoln, Missouri is the 2018 Iowa Champion Auctioneer. Jeffrey Garber comes from a family in the industry and he’s been a professional auctioneer for six years.

“Engaging the crowd and pulling those bids in and working for the seller and trying to get top dollar and the rhythmic chant,” Garber said. “It’s an adrenalin rush for me.”

Garber is a contract auctioneer, so he travels the country conducting auctions.

“I was fortunate enough to sell Elvis Presley’s jet, which was kind of cool,” Garber said. “I’ve sold a lot of memorabilia such as Michael Jackson’s ‘Moon Walk’ shoes…so I’ve been very fortunate in my few short years behind the microphone.”

Garber speaks three languages: English, German and the sing-song chant of the auctioneer.

“A lot of people wonder if I’m musically talented and the answer to that is: ‘No!’ Garber said, with a laugh. “I can’t carry a tune in a bucket, but for some reason, I can chant and I think God has blessed me in the fact that I grew up with it. A lot of my family were auctioneers, so it comes second nature to me.”

Garber was one of five finalists who competed today in front of a large crowd at the Iowa State Fair. This is the 53rd year for the contest that’s run by the Iowa Auctioneers Association.