You are here: Home / Fires/Accidents/Disasters / Man traveling down Mississippi River to raise funds for disaster relief 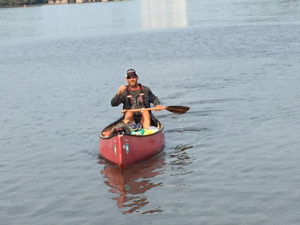 A man making a canoe trip from the beginning to the end of the Mississippi River wants to raise awareness and funds for a Rotary Club effort to help in areas of natural disasters. Eric Elsea made an overnight stop in Clinton on that journey where he met Rotary Club members and others.

Elsea says the Rotary program is known as Shelterbox U.S.A. “We preposition life-saving equipment at eleven different places around the world that we can deploy rapidly after things like natural disasters — and in some cases, man-made conflicts — for instance, the Syrian refugee crisis,” Elsea says. The Shelterbox is a key component of what they do. 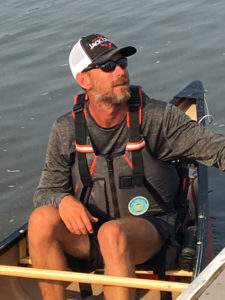 “A shelterbox typically includes things like at tent, blankets, water purification system, solar lighting, mosquito netting, things like that to provide shelter, warmth and dignity to families on their worst day ever,” according to Elsea. He currently resides in Florida but grew up in the St. Louis area and helped sandbagging efforts during the flood of 1993 and that’s why he chose the journey along the Mississippi.

Elsea says he’s enjoyed meeting the people along the route. “It has been better than I ever imagined,” Elsea says, “it’s absolutely gorgeous, the weather has been great. There’s been scenery and wildlife and stuff I just never imagined. I’ve been having the time of my life.”