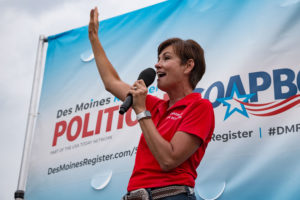 Governor Kim Reynolds today said the state’s low unemployment rate and the tax cuts she signed into law this spring show Iowa is on the right track with Republican leadership.

“And I’ve got something to tell you: we we’re just getting started,” Reynolds said. “We are never going to be satisfied with the status quo. There is so much potential and capacity that exists in this state and we’re excited about continuing the momentum.”

Reynolds spoke late this afternoon on The Des Moines Register’s Soapbox at the Iowa State Fair. She did not mention her Democratic opponent Fred Hubbell by name, but did blast Democrats in general.

“We have a lot of positive things happening in Iowa and I know the other side wants to think everything’s doom and gloom and Iowa’s going to hell in a handbasket and I’m sorry. It is not,” Reynolds said and, as the crowd cheered, she continued: “No, it’s not!”

Reynolds has been governor for about 14-and-a-half months and emphasized the history made when she took the oath of office. 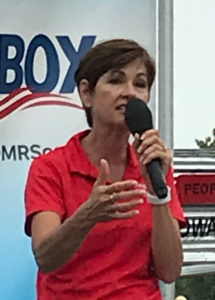 “And today serve Iowans at the highest level as the first female governor of the great state of Iowa,” Reynolds said, to applause and cheers.

Reynolds touted the new state law authorizing “health benefit plans” to be sold by the Iowa Farm Bureau as a cheaper alternative to traditional insurance. Reynolds said it’s part of the “bold and ambitious agenda” that cleared the 2018 legislature.

“Keep Iowa Moving — K.I.M. — in the right direction,” Reynolds said near the end of her speech. “If you listen to what my opponent wants to do, he wants to reverse every single positive thing that we’ve done.”

Reynolds told the crowd her husband, Kevin, had an appendectomy at 4 a.m. Tuesday morning. He was released from the hospital by Tuesday afternoon.

“I just want to thank the doctors, the surgeons and the nurses who did such a phenomenal job of taking care of Kevin,” Reynold said. “He’s back home already and he’s going hunting in two weeks, so that’s all he’s cared about. He wants to make sure he’s in good shape and can head off and go elk hunting.”

Kevin Reynolds retired a year ago after working as a district conservationist for the U.S. Department of Agriculture.