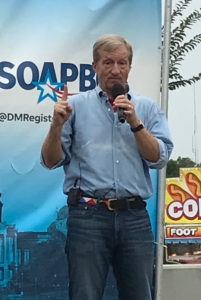 The California billionaire who has been running TV ads and holding town hall meetings to talk about impeaching President Trump says it’s all about Trump’s “lawlessness” rather than the policies Trump’s pursuing.

Tom Steyer spoke this afternoon on The Des Moines Register’s Soapbox at the Iowa State Fair. “I think we have a wreckless, dangerous and lawless president and every American patriot a duty to speak out if he or she believes that and a duty to stand up for our country,” Steyer said. “It’s a question of patriotism, not partisanship.”

Steyer said Trump’s number one impeachable offense is getting money from foreign adversaries who are staying in the hotels and golf clubs Trump owns. Steyer’s political action committee has been registering voters in Iowa since 2014, targeting people under the age of 35 who are half as likely to vote as people in other age groups. Steyer isn’t saying whether these efforts are a prelude to his own presidential campaign in 2020.

“We’re running what I think with our partners is the largest grassroot organization in the United States and we are totally focused on November 6, 2018,” Steyer said. “…I promise the day after Election Day, I will be working full-time for justice in America…could be a lot of different things.”

Steyer said as of today, his organization has contact information for 5.6 million Americans, only a third of whom vote in non-presidential elections. Steyer said increasing participation among those who don’t normally vote in mid-term elections will be key for Democrats in 2018.