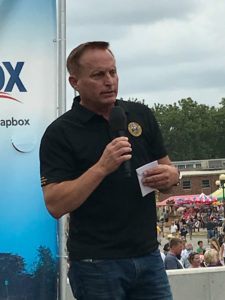 Secretary of State Paul Pate — the commisioner of Iowa elections — said Tuesday there is no way for hackers to alter votes in Iowa because every one of the state’s voters cast a paper ballot.

“In Iowa, we don’t vote on the internet…so you can’t be voting from Moscow, Russia. You can’t. The only ones that I would let vote from Moscow are the folks from Moscow, Iowa,” Pate said. “That’s it.”

Pate spoke yesterday on The Des Moines Register’s Soapbox at the Iowa State Fair. Pate warned the crowd “bad actors” on social media platforms like Twitter and Facebook may try to sow doubt about election results.

“(They) will use propaganda to create that doubt in your minds. They want to undermine so you don’t believe the voting results…We cannot allow them to do that,” Pate said. “We work every day — the (county) auditors, the poll workers, myself…Homeland Security — we’re dealing with all these partners to try and make sure we do the very best to give you that assurance and we’re not going to stop.”

Pate, a Republican, served one term as secretary of state in the 1990s and returned to office in 2015. He is seeking reelection this year to a third term as secretary of state. His Democratic opponent, Deidre DeJear. Last week, DeJear accused Pate of not doing enough to secure voter registration information that is computerized, as recent news from the investigation of Russia’s attempt to influence the 2016 election revealed Russian operatives visited the websites of some Iowa counties.

Pate said new voter ID requirements will address that, as voters show a driver’s license, a military or tribal ID, a passport or voter registration card at their polling place.

“It gives us the crucial information to make sure you’re voting in the right location and you are who you say you are,” Pate said. “Ninety-two of our 99 counties already have E-poll books and this card or one type of ID that we’ve authorized are the key to it.”

The voter ID requirement takes effect in 2019. For the 2018 election, Iowans who do not show an ID at their polling place may sign an oath verifying their identity and will be allowed to cast a ballot.