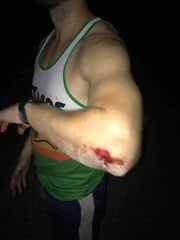 Bicyclists are feeling a lot safer on a popular trail in southwest Iowa following the arrests of three teenagers.

“There was a log in the trail, some juveniles were throwing large stones…and hit a man in the face right by his eye socket, and we discovered some twine (across) the trail at different times,” Losh said. The debris was often placed on the trail on Thursday nights when up to 2,000 cyclists participate in what’s called the “Taco Ride” from Council Bluffs to Mineola.

Two 15-year-olds and a 16-year-old were arrested during last Thursday’s ride.

“So, it’s been a relief and the officers involved have been great with their undercover work on this,” Losh said. According to Losh, the deputies caught the teens preparing something that could’ve critically injured a cyclist.

“They kind of knew what they were looking for and I think they hid and watched the youth starting to put some fishing line across the trail when they made the arrests,” Losh said. The trail is dark in the area where the teens were allegedly placing obstructions. Losh said one cyclist badly skinned his elbow, knee, and hand in early July when he was thrown from his bike after hitting a log placed over the trail.

“They probably thought it was a funny prank, but when people get hurt bad, it’s really not funny,” Losh said. The teens are charged with simple misdemeanors. Their names are not being released.