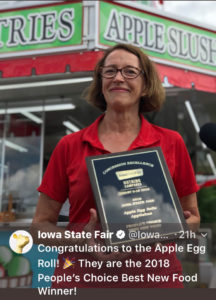 The 2018 “People’s Choice” for best new food at the Iowa State Fair is the Apple Eggroll.

“We’re using the same filling that we used in our apple tacos last year, only we’re dicing the apple instead of slicing it…People are getting a change to taste the really good caramel that we’ve had for over 30 years,” says Connie Boesen, the owner of the four Applishus stands on the Iowa State Fairgrounds.

Her products are not frozen, but made fresh in each stand. She was in one of the stands early this morning, teaching new employees how to roll out the egg roll crust since she anticipates a boost in business due to winning the “best new food” competition.

“We have a huge repeat business for all of our product,” she says. “It’s great to see the reaction. Now, we’re just hoping we can keep rolling, keep up with it.”

Boesen’s father, Ken Fulk, was the long-time manager of the Iowa State Fair and she grew up on the fairgrounds. After running the Applishus business for more than three decades, Boesen says she still likes apples — well, a specific type of apple.

“The reason I started this is I do not like caramel apples that were with red apples,” Boesen says. “I love Granny Smith — the tart with the sweet — and in order to come into the fair, I wanted something different, so I slice the apple, so it’s easier to eat and I found a candy company that makes a tremendous caramel.”

State Fair officials say the Brown Sugar Pork Belly on a Stick from the Iowa Pork Tent and the All Iowa Belly Up Burger from The Rib Shack were “stiff competitors” in the best new food competition.