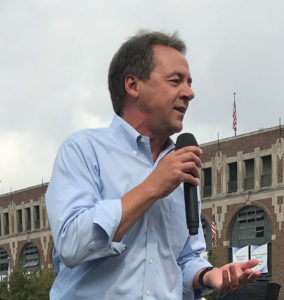 “Think about this recent tax cut that happened — $1.9 trillion in debt onto our kids and grandkids. Senator Graham said: ‘We have to do this to…appease our donors,'” Bullock said today on The Des Moines Registers’ Political Soapbox at the Iowa State Fair.

Bullock filed a lawsuit this summer challenging the IRS decision that certain political organizations known as 501(c) groups will no longer have to reveal who their donors are to the IRS.

“Think about this: now, truly a Russian couuld write a check and influence our elections. We would never even know,” Bullock said. “…This rule had been around since 1971. Richard Nixon wasn’t exactly the model of good government and transparency.”

And Bullock argued none of the big issues facing the country can be addressed until money “is no longer allowed to corrupt the system.”

Bullock spent the past couple of days campaigning with Iowa Democrats and visiting with State Fair-goers. Bullock said during his “Soapbox” speech that Democrats need to figure out how to connect with Trump voters at the local level. Bullock is the only Democratic governor who was reelected in a state Trump won in 2016.

“The Democratic Party didn’t necessarily change,” Bullock said. “We just haven’t been able to figure out the ways to be speaking to people off of the coasts and if we can’t speak the language of the people of Iowa and Michigan and Wisconsin and others, even if you can get an electoral majority, you’re never going to have a governing majority.”

Bullock, though, isn’t ready to talk about whether he’ll run for president in 2020. The two fairgoers who asked the governor questions during his “Soapbox” appearance both asked about his 2020 intentions.

“I do have a story of how I’ve been able to bring people together and I think that’s, in part, what our country desperately needs,” Bullock said and many the crowd applauded. “…Right now, what I’m doing is listening and that’s honestly as far as it goes.”

Another out-of-state Democratic office-holder visiting the fair yesterday gave a strong answer to the “will you run?” question.

“I’m not running for president,” Boston Mayor Marty Walsh said, with a laugh. “No, I’m not.”