You are here: Home / Crime / Courts / Remains found near La Porte City that could be Jake Wilson 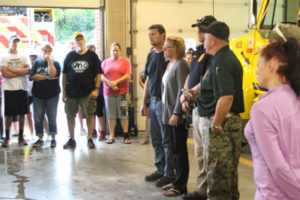 La Porte City Police Chief Chris Brecher struggled to keep his composure Thursday afternoon, as he opened a news conference by announcing human remains found in a creek this week are likely that of a teenager who’s been missing for over four months.

“We are confident that we are on the right path. We have had confirmation,” Brecher said in a shaky voice. “What has been found is consistent with what we had been looking for.”

It’s believed the remains are that of Jake Wilson, the 16-year-old autistic boy from La Porte City who disappeared on the evening of April 7. His step-father reported Jake went for a walk to Wolf Creek and failed to return home.

The remains were found on Tuesday by kayakers in an area downstream of La Porte City — an area search teams had combed many times.

“We’ve been in a position where the weather has allowed the creek to recede substantially over the last couple of months. We believe this is what allowed the kayakers that were out on the water to locate this,” Brecher said. According to Brecher, it could take a couple of weeks for DNA testing to confirm what was found. He refused to speculate if Jake’s apparent death was an accident or something else.

“We’re not in a position right now to make comment on any possibility of foul play,” Brecher said. At the close of the news conference, Jake’s biological father attacked the boy’s step-father. The incident was witnessed by several reporters and Brecher helped break-up the two men. Mike Wilson was then charged with two counts of simple assault.

(Elwin Huffman contributed to this story)