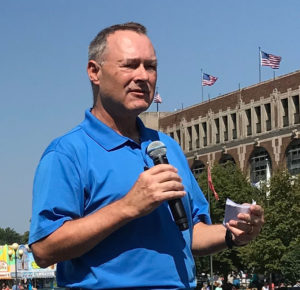 A former Ames City Councilman is challenging the longest-serving state treasurer in the country in this year’s General Election.

Michael Fitzgerald is seeking a 10th term. “The treasurer’s job is to keep the money safe, kind of the banker for the State of Iowa and we have kept the money safe,” Fitzgerald says.”…You know, all the times I’ve been treasurer — I’m a Democrat — there’ve been Republican auditors and there’s never a criticism of how we’ve managed the money.”

“We have a retirement crisis in this state. If you’re in IPERS or have a pension plan, that’s great, but also there’s a lot of folks — about half the people don’t have anything when they’re 55 years of age, (they) have nothing.”

Seven other states have established state-run retirement plans that are not run with state tax dollars, but the investment portfolio is managed by state officials. 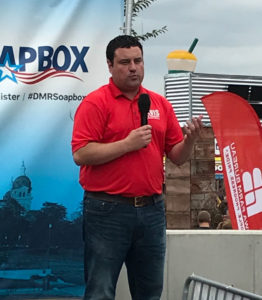 The Republican who’s challenging Fitzgerald in 2018 is Jeremy Davis, a former aide to Congressman Steve King who served one term on the Ames City Council.

“The state treasurer is the chief revenue officer of the state,” Davis says, “but when’s the last time he reached out to Iowans and asked: ‘How do you feel your money is being spent? Is it being spent appropriately by the legislature? Is the governor introducing the type of budget that meets the needs of all Iowans?'”

Davis says if he’s elected treasurer, he’ll launch a task force to identify duplication and wasteful spending that should be eliminated at the three state universities.

“We, as the state leadership, need to make the hard discussions and the hard decisions that will ultimately help either stabilize or bring down the cost of higher educaiton in this state,” Davis says.

Davis is floating one idea already: create one financial accounting platform for all three universities.

Davis and Fitzgerald made their comments during speeches on The Des Moines Register’s Political Soapbox at the Iowa State Fair.