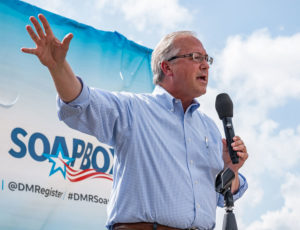 Republican Congressman David Young says he doesn’t question President Trump’s intentions to strike better trade deals for the U.S., but Young says he and “lot of a people” in his congressional district are nervous about Trump’s trade threats.

“As a leverage tool, I understand what he’s doing,” Young says “But as a policy, we cannot allow this to go on a whole lot longer and have this become pure policy.”

Young spoke with reporters today after delivering a speech on The Des Moines Register’s Political Soapbox at the Iowa State Fair. Young said if Trump is able to renegotiate NAFTA and resolve trade and intellectual property disputes with China, the impact on Iowa’s economy will be “pretty incredible.”

Young also touted the impact tax cuts passed by congress and approved by the president have had on the economy.

“There’s an economic renaissance going on in Iowa and this country,” Young told the State Fair crowd, “and we have to make sure it continues.”

Young is seeking a third term in the U.S. House representing Iowa’s third district. Political analysts have rated his race with Democratic challenger Cindy Axne as a “toss-up.” Vice President Mike Pence appeared at a campaign fundraiser for Young Wednesday and later told reporters this Iowa’s third district race may decide which party controls the U.S. House in 2019.