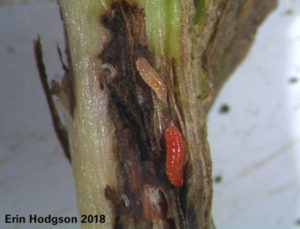 Iowa soybean growers have a new threat to worry about, the soybean gall midge.

The recently-discovered pest is confirmed in 16 western Iowa counties so far and it’s destructive. Professor Erin Hodgson, an extension specialist in entomology at Iowa State University, says there are still many unknowns about the new bug and they haven’t yet confirmed its species.

“The immature of the larvae is pretty interesting,” Hodgson says. “It starts off as kind of a clear, almost translucent larvae and then as it matures, it gets darker. It almost looks like like a mandarin orange slice. It pops really orange when you slice open a soybean stalk.” Once they reach the fly stage, the midges are small — just two or three millimeters in length. They have long antennae and unusually hairy wings.

“It’s the larvae that we really care about because it eats at the base of soybean stems on the inside,” Hodgson says. “When it consumes that plant tissue, basically the plant doesn’t have anything to stand on so it lodges and it tips over.” So how do you kill it? That’s an excellent question, Hodgson says, but she can’t yet offer a practical solution.

“When pests are inside of plants, like corn borers and other types of corn pests that get inside the ear, it’s really hard to treat because our full ear insecticides don’t penetrate that plant tissue,” Hodgson says. “I don’t have a good answer for people on how to control these larvae once inside the plant.” Eventually, there may be an adult control program but for now, there’s no good defense. Treating seeds with insecticide does -not- appear effective in holding off the midges, she says. The soybean gall midge is confirmed in these counties: Buena Vista, Cass, Cherokee, Clay, Crawford, Fremont, Harrison, Ida, O’Brien, Page, Plymouth, Pottawattamie, Lyon, Montgomery, Shelby and Woodbury.