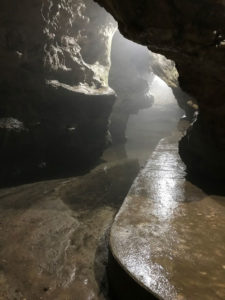 A popular eastern Iowa state park with very unusual geological features is reopening to the public next week after being closed more than three months for extensive renovation.

Park Ranger Scott Dykstra says Maquoketa Caves State Park will again be a spectacular destination for nearby residents and for visitors from around the world. Dykstra says you’ll notice the changes right away.

“The biggest thing will be our road construction that we had go through the whole park,” Dykstra says. “They replaced the old asphalt road with concrete, and then we upgraded electricity in our campgrounds. We only had 30 and 20 amp receptacles. Now, we’re at 50, 30 and 20 and we increased the number of electrical sites in our campgrounds.”

One of the largest of the many caves, Dancehall Cave, has new LED lighting for energy efficiency and increased brightness. That cave also has Raccoon Creek running through it, which brought in tons of debris over the years.

“The creek floor had about 8 to 12 inches of mud and rock and dirt,” Dykstra says. “We took equipment in there and were able to clean out that sediment. And then the lights will really make a big difference. People now can see the cave formations a lot better without a flashlight in that cave.”

Other upgrades include: a new footbridge on Woodland Trail, new boardwalks on all trails, a new check-in station for campers and a new parking lot with sidewalks near the cave entrance. Soon enough, the park should be pulling in plenty of visitors to explore the six miles of trails and its many unique caves, limestone formations and rugged bluffs.

“We would see roughly anywhere from 1,000 to 1,500 people per day on a Saturday and Sunday,” Dykstra says. “Then, on average, it was hit and miss on weather, about 400 to 500 people on the weekdays. We’re hoping to see that happen.” The park reopens to visitors and campers next Friday, August 24th.