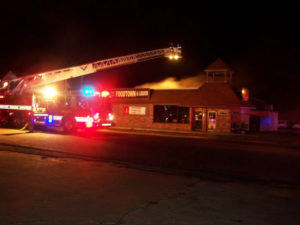 Fire destroyed the only grocery store in Remsen.

The only grocery store in the northwest Iowa town of Remsen was destroyed in a weekend fire.

Firefighters from Remsen and several neighboring communities fought the fire for more than five hours. The fire was reported at about 4:15 AM Sunday. Remsen Assistant Fire Chief Mark Gaskill says they believe they’ve pinpointed what sparked the fire at Farm Fresh Foodtown.

“The breaker box that the main power comes into the grocery store in the back, it had blown a fuse and the panel was not secured shut, so that is probably where the fire started,” Gaskill says. “From there, it started a bunch of cardboard on fire and then started moving through the building itself.” Gaskill says the building was demolished.

“I would consider it being a total loss,” Gaskill says. “Some of the building might still be okay but contents inside would be a total loss.” Sammy Chodha , the owner of the store, says he will rebuild and bring back a grocery store to small community.

“I’ll be sooner than the insurance company to make it a better establishment and make it work for the people of Remsen,” Chodha says. Five different fire departments responded to the blaze, from: Remsen, Oyens, Marcus, Granville and Le Mars.