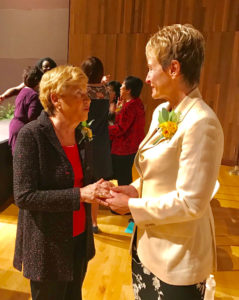 An astronaut, the first women in Iowa to be elected as a county prosecutor and two retired university professors were inducted into the Iowa Women’s Hall of Fame this weekend.

Beaconsfield native Peggy Whitson has spent 665 days in space — more than any other American. She used her brief speech at Saturday’s ceremony to praise the other women on stage and in the audience.

Whitson also honored one of her college professors, who was in the audience.

“Having mentors is an amazingly powerful experience for me,” Whitson said. “…Those mentors can make the difference in your life and they have for me.” 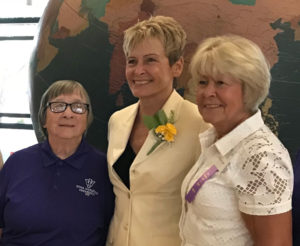 Dolores Wilson, a biology professor, met with Whitson and Whitson’s mother on the Iowa Wesleyan campus in Mount Pleasant in the summer of 1978 and Whitson told the professor she wanted to be an astronaut.

“I said: ‘Do it!’ and I said: ‘Don’t be discouraged,'” Wilson said Saturday as she recounted that initial conversation. “And I said: ‘You know, just because they’re not having women astronauts now doesn’t mean they’re not going to do it.'”

Ruth Harkin, another 2018 inductee in the Iowa Women’s Hall of Fame, was elected Story County Attorney in 1972 when she was the only female attorney in Story County.

“Early on I was motivated by a couple of guidelines. One — you have to be in the room to make a difference. A second guideline was to do what I wanted to do. Most of the work and jobs I have done people told me I could not do. I never listened to that,” Harkin said and the audience laughed. “It has been liberating, I can assure you.”

Harkin served two terms as Story County Attorney. She moved to Washington in 1979 after her husband, Tom Harkin, won a third term in the U.S. House of Representatives. Harkin said she was told her resume as an Iowa prosecutor wasn’t that impressive and she’d have a hard time finding a job.

“Nonetheless, I became deputy general counsel at the Department of Agriculture. The secretary at the time said he didn’t want me. ‘When I look at you I see my wife and she could never do this job,'” Harkin said, drawing gasps from the audience, followed by laughter when she revealed: “I took the job anyway.”

In 1993, Harkin was the first woman appointed president and CEO of the Overseas Private Investment Corporation.

In 1997, United Technologies hired Harkin as a senior vice president and, in 2003, she became a director of ConocoPhillips.

Earlier this month, Dianne Bystrom retired as director of the Iowa State University Center for Women and Politics and she was inducted into the Iowa Women’s Hall of Fame this weekend as well.

“In my 39 years of work in higher education, I know the importance of developing and supporting and recognizing the contributions of women,” Bystrom said.

Bystrom has done extensive research about ads used in races that feature a female candidate. Under her leadership, ISU’s Center for Women and Politics has hosted “Ready to Run” workshops for Iowa women considering a run for public office.

Dr. Jean Jew, a researcher and instructor in the University of Iowa College of Medicine, was also inducted in the Iowa Women’s Hall of Fame this weekend. In 1985, Jew filed a lawsuit against the University of Iowa for ignoring repeated sexual and racial harassment. She won not only a financial settlement, but also a public apology from the university.