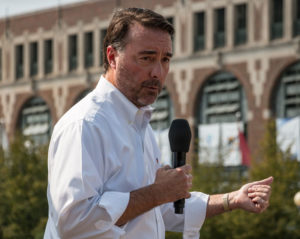 Christopher Peters — the Republican in a rematch with Democratic Congressman Dave Loebsack of Iowa City — says health care costs are still the number one issue among voters in the second congressional district, but Peters says neither Democrats nor Republicans are offering “meaningful” solutions.

Peters, a physician from Coralville, says “ObamaCare” made a “really bad” health care system even worse.

Peters made his comments during a speech this past weekend on The Des Moines Register’s Political Soapbox at the Iowa State Fair. Immigration reform is another top issue that must be resolved, according to Peters.

“There have been some good proposals out there. Congress just needs to step up its act and get it done, for a change,” Peters said, although he did not specify which approach he favors.

Peters is arguing congress needs to change its approach to resolving conflict and start governing.

“We have to be able to talk to one another again and that seems to be an increasingly hard thing to do,” Peters said. “…All people on the left are not snowflakes. Not everybody on the right is deplorable.”

Peters said to remain as a self-governing republic, the country must be able to have legitimate debates about ideas, rather than just “verbal fighting” from opposing political factions.