You are here: Home / News / Congressional candidate Scholten says government policies are ‘pushing down on our farmers’ 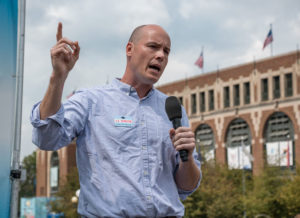 J.D. Scholten, the Democrat challenging Republican Congressman Steve King’s bid for a ninth term, says consolidation in agriculture and President Trump’s trade war are making it harder for farmers to make a profit. The EPA’s anti-ethanol moves to benefit the oil industry isn’t helping either, according to Scholten.

Scholten made his comments this weekend during a speech at The Des Moines Register’s Political Soapbox at the Iowa State Fair. Scholten, a former professional baseball player who now works as a paralegal in Sioux City, stressed his family’s farm roots.

“My great-great grandparents turned the field in Worth County and so it’s in my blood,” Scholten said. “I’m a fifth-generation Iowan, first to be raised in town. Our family farm we rent out to a family friend.”

Scholten criticized the Bayer-Monsanto merger, arguing farmers will have to pay more for seeds and farm chemicals. And Scholten saod farmers are the first victims in the Trump Administration’s trade policies.

“The fourth district is bearing the brunt of these tariffs and that’s got to end,” Scholten said. “You look at the $12 billion bailout…It’s like you’re getting punched in the face and that same guy that’s punching you in the face gives you an ice cube.”

Scholten saod both Democrats and Republicans have failed farmers by allowing the mergers of grain processing, meat packing and seed companies to create monopoligies and “it’s time to get ahead of the curve.”