You are here: Home / Fires/Accidents/Disasters / Another fire in Cedar Rapids found to be arson 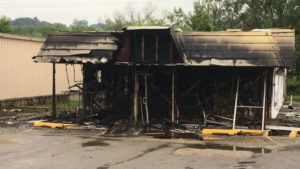 Investigators say a fire that destroyed a dry-cleaning business in Cedar Rapids is a case of arson.

The Monday morning fire at Duchess Cleaners followed a nearby house fire on Friday that authorities say was also intentionally set. Cedar Rapids Fire Department spokesman Greg Buelow says, for now, it’s unclear if one person may be responsible for both fires.

“We haven’t made that link between the two, but the proximity to one another…certainly it’s understandable why people would have that concern,” Buelow said. Both fires happened on the city’s northeast side. People who live in the area are being urged to call the fire department at 319-286-5200 if they might have information in either arson case. That could include video from security cameras.

“I can tell you that our investigators have received some evidence from some surrounding homes and businesses and they’re going through that right now to see if we can find the person or persons responsible for setting these fires,” Buelow told Radio Iowa. The fire at Duchess Cleaners was reported just before 5 a.m. Monday. The business was closed at the time and no one was injured.

Two firefighters were injured in last Friday’s house fire. One was shocked by electricity, while the other was treated for shortness of breath. A family of four lived in the home, but they were not there at the time. The family’s cat died in the fire.

A third case of arson in Cedar Rapids remains under investigation. That involves an apartment building fire last Wednesday. “That case appears to be isolated to itself,” Buelow said. “We believe that it was a targeted incident and the investigators have several leads on the suspect or suspects involved in that.” Two people were rescued from the third floor of the building by police officers using a ladder. Two other people jumped to safety from upper floor windows.