Investigators today announced they believe the body found in a cornfield near Guernsey is missing University of Iowa student Mollie Tibbetts. DCI Special Agent Rich Rahn says they have arrested 24-year-old Cristhian Bahena Rivera and charged him with first-degree murder.

“We have confirmed with Homeland Security he is an illegal alien and he has been in this area for four to seven years,” Rahn says. Rahn says a surveillance video gave them a big break in the case.

“During the investigation we reached out to the public as you well know,” Rahn says. “And during our neighborhood canvas we came across an individual who had security cameras. We took those cameras — he was kind enough to give us the footage from it — and through that we were able to identify a vehicle that we believed belonged to mister Rivera.” That vehicle was a black Malibu. He says they spend hours going through the video and found the clues they needed.

“We were able to track his pattern and the routes in which he took,” Rahn says. “We were also able to find Mollie running on this video and we were able to determine that he was one of the last ones to see Mollie — based on the video.” That was July 18th, the last day that the 20-year-old Tibbetts was seen alive. Rahn says once they identified Rivera, they brought him in Monday for a lengthy interview.

He actually tells us that he ran alongside of her or behind her. And then at one point he tells us that Mollie grabbed her phone and told him ‘you need leave me alone I am going to call the police,” according to Rahn. “And then she took off running. He in turned chased her down. And then he tells us at some point in time he blacks out, and then he comes to near an intersection where we believe he then place Mollie.” Rahn says Rivera led them to the Tibbetts’ body. He says they had gone over the area before, but the body was hidden.

“She was found in a cornfield and there were cornstalks placed over the top her — and so we just weren’t able to locate her at this particular of the investigation, ” he says. Rahn says he cannot say exactly why Rivera may’ve killed Tibbetts.

“I can just tell you that it seemed that he followed her and seemed to be drawn to her on that particular day,” Rahn says. The search for Tibbetts went from tiny Brooklyn across the state, the nation and internationally. Rahn says the video clue ended up being the key. 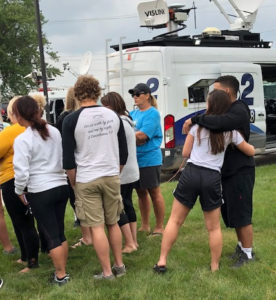 Friends of Mollie Tibbetts gathered for the news conference.

“The video was critical — I’ll put it that way,” Rahn says, “again we have talked to hundreds of people. Over four-thousand leads came in on this investigation. It was extremely helpful” Rahn says while they believe the body is Mollie Tibbetts, they have scheduled an autopsy Tuesday at the State Medical Examiner’s Office to confirm it.

“It takes a while to get the results, so that make take anywhere form up to four to six weeks. We just can’t predict that,” Rahn says.

Friends and family of Tibbetts were at the Poweshiek County Sheriff’s Department for the announcement. They have led an effort that stretched from their tiny community across the state and even internationally with posters and buttons that asked for help in finding Mollie.

(Joe Lancello of KBOE in Oskaloosa and O.Kay Henderson of Radio Iowa contributed to this story.)

Here are some of the reactions to the news:

“Today, our state woke up to heart-wrenching news. As a mother, I can’t imagine the sorrow felt by the Tibbetts family. We are all suffering over the death of Mollie, knowing that it could have been our own daughter, sister or friend.
“I spoke with Mollie’s family and passed on the heartfelt condolences of a grieving state. I shared with them my hope that they can find comfort knowing that God does not leave us to suffer alone. Even in our darkest moments, He will comfort and heal our broken hearts.
“I want to recognize and thank our local, state and federal law enforcement community for their coordinated and tireless efforts to find Mollie.
“Over the past month, thousands of Iowans searched and prayed for Mollie’s safe return. Now, we are called to come together once again to lift up a grieving family. The search for Mollie is over, but the demand for justice has just begun.
“As Iowans, we are heartbroken, and we are angry. We are angry that a broken immigration system allowed a predator like this to live in our community, and we will do all we can bring justice to Mollie’s killer.”

Melissa Shivers, Vice President for Student Life and Interim Chief Diversity Officer at the University of Iowa, issued the following written statement:
“We are deeply saddened that we’ve lost a member of the University of Iowa community. Our thoughts are with Mollie Tibbetts’ family, friends, and classmates. Losing a fellow student and member of our Hawkeye family is difficult. President Harreld and I share in your grief and encourage you to reach out if you are in need of support.”

“This is truly heartbreaking,” said Fred Hubbell. “For Mollie’s parents, her family and friends, any words today will be of little comfort. As a parent and grandparent your worst nightmare is losing your child. I know this must be an unimaginable loss. Please know our family and Iowans everywhere share your grief and are united in pursuit of justice. I want to commend our law enforcement officials who worked around the clock to investigate this crime. In this state, if you break the law, you will face the consequences.”

Iowa Senators Chuck Grassley and Joni Ernst released the following statement: “We are deeply saddened that this bright, young woman’s life was cut short. Our heart goes out to the family and friends of Mollie Tibbetts. No family should ever have to endure such a tragedy, especially one that could have been prevented.  We are thankful for the hard work of Governor Kim Reynolds and federal, state and local law enforcement as they continue to find answers for Mollie’s family and the American public and bring the killer to justice.  As Governor Reynolds said, ‘our immigration system allowed a predator like this to live in our community.’ Too many Iowans have been lost at the hands of criminals who broke our immigration laws. We cannot allow these tragedies to continue,” – Sens. Grassley & Ernst.