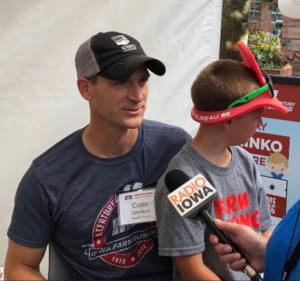 About two-thirds of the state has adequate moisture levels in the topsoil and subsoil to support the final stages of crop development, but the report indicates 11% of the state is “very short” of topsoil moisture. Davis County in south central Iowa was recently declared a federal disaster area due to drought conditions.

Colin Johnson farms in southern Iowa’s Wapello County, near the community of Agency. He has about 700 acres of row crops.

“It’s such a spotty year all around the state, but ours look pretty good. I’m not going to complain. You go south of us in the southern half of Davis County and they’re cooked,” Johnson says. “They’re probably worse off than they were a year ago.”

Johnson says fewer than 10 inches of rain has fallen crops since the end of April, but luckily he planted drought-tolerant corn.

“In our soils, we don’t have that natural water-holding capacity, the tilth that I think we do in the rich soils of northern Iowa and so the drought-resistet hybrids really pay off for us,” Johnson says.

“We’re actually about 10 or more days ahead of normal since the first of May, so we’ve made great progress,” DeJong says. “Corn looks like most of its going to be mature in early September to mid-September, which means we’re going to have fairly good dry-down weather and we’re probably going to have a fairly early harvest, barring excessive rainfall.”

“The good news there was we haven’t seen a lot of disease pressure, occasionally we see a field with some diseases. We haven’t seen a lot of soybean aphid issues like we see some years. I think there are some scattered locations that have had some problems, ” DeJong says. “…For me to guess soybean yields, it’s kind of look at the weather and make your best guess.”

Nearly three-quarters of the state’s corn crop is rated good to excellent in the weekly USDA report, while statewide soybean conditions declined slightly to 70 percent rates as good to excellent.