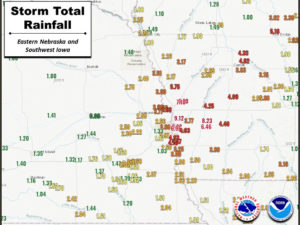 Parts of western Iowa got drenched by a storm system that started dumping rain on Sunday.

“Because it was over a prolonged period, that’s why some of the damage was not as excessive as it could have been,” she says.

But excessive is the word to describe the amount of rain recorded in the community of Woodbine, where nearly a foot of rain fell.

“Because the rainfall was so high, a lot of people’s rain gauges may not have caught all of the rain,” she says. “Sometimes there are bucket surveys where people have a bucket out and they might measure that at a later, but of the reported amounts so far…we have that 11.9 inches in Woodbine.”

Motorists were stranded in some areas. There was street flooding in Council Bluffs. Mudslides were reported in Harrison County along Highway 44.

“The Department of Transportation did clear that up very quickly,” Zapotocny says. “There were also some mudslides in Pottawattamie County and they reported a number of road closures.”

Thousands in western Iowa and eastern Nebraska also lost power over the past 36-to-48 hours. Tree and limbs fell amid strong winds on the outer edges of the storm system.