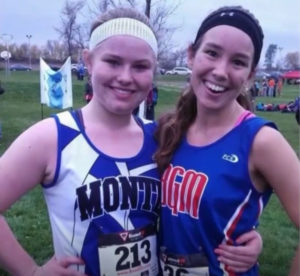 A woman who competed against and became close friends with Mollie Tibbetts says she hopes people will remember Mollie for how she lived, not how she died. Alexis Morrison told KCRG-TV she first met Mollie in the eighth grade. Both loved running and faced each other on the track.

“We ran our whole high school and middle school career together,” Morrison said. “We were always right by each other in every race.” Mollie ran for BGM and Alexis for Montezuma schools. Alexis said while she always looked forward to races against Mollie, it didn’t matter who won. They encouraged each other to post personal best times.

“We prayed together and stuff before every race to help each other,” Morrison said. The 20-year-old Tibbetts, who was to be a sophomore at the University of Iowa, disappeared on July 18 while on a jog in her hometown of Brooklyn. On Tuesday, authorities announced the arrest of a 24-year-old man who’s accused of killing Tibbetts and leaving her body in a cornfield. Morrison said she’ll focus on her memories of Mollie, but the life-long runner said this situation has changed her routines. She now takes some precautions before heading out on trails through Poweshiek County.

“My husband actually just bought me a taser because I’m training for a half marathon and it’s really scary to be out there,” Morrison said.