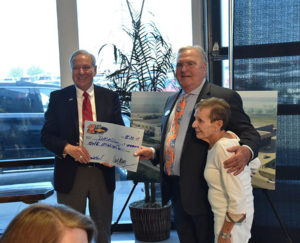 DMACC President Rob Denson along with Carl and Penny Moyer.

DMACC Rob Denson says the current auto facility on the Ankeny campus was built in 1980 and is outdated. A gift presented to the school Wednesday will help double the size of DMACC’s Auto Tech Center. Carl Moyer, owner of Karl Chevrolet, announced his family is donating $1 million to the $12 million project.

Denson said construction will be started later this year and be completed in fall 2020. The project will involve the addition of 22 vehicle bays, a new classroom and student lounge, conference room and showroom. Nine classrooms in the existing facility will be renovated.

The facility will be called the Karl Chevrolet Automotive Technology Center at DMACC.