You are here: Home / Crime / Courts / Brooklyn murder spurs more interest in self defense among women 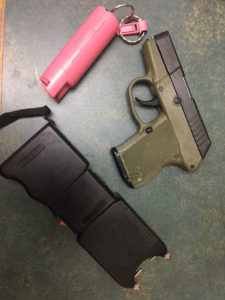 The owner of a martial arts training studio in southwest Iowa says he’s seeing renewed interest from women who want to learn how to defend themselves following Mollie Tibbetts’ murder.

Jim Sutton, who runs Kung Fu Damsels in Council Bluffs, says many women rely on familiar stand-bys like pepper spray, stun guns and even metal key chains — all of which can be effective. “Just try to inflict pain,” Sutton says. “The whole idea is to hand them 15 to 30 seconds of focused resistence. Not today. Let them know there’s going to be a fight. They didn’t come for a fight. In most instances, they came because they thought there was something they could take.”

Investigators believe the 20-year-old Tibbetts, a University of Iowa student, was attacked and killed while jogging last month near her hometown of Brooklyn, Iowa. A suspect was arrested this week who reportedly says he followed Tibbetts in his car, parked and got out, ran along side the young woman and confronted her. He later led authorities to Tibbetts’ body in a Poweshiek County cornfield. Sutton says there are multiple legal options women — and men — may chose to use in self-defense.

“Some people choose the firearms route, just having something with you that you can turn around and brandish,” Sutton says. “I can face an attacker with a stun gun, fire that nasty little blue spark and say, ‘Come here, jerk,’ right? Or, ‘Not today, let’s fight, I’m ready to fight you,’ that’s what you want to communicate to them.” Using those tools gives you time to make a safe escape and Sutton says that should be your ultimate goal. He spouts phrases like: “Stun and run,” “shock and rock” and “hit and get.”

“If you get two or three good shots into that person’s ribcage, when you see them recoil, get out of there,” Sutton says. “If you fire a pepper spray and you hit them straight in the face, don’t be standing in the last spot they saw you. If you have a stun gun, jam that into them, fire it, hold it for two to three seconds and then get distance between you and that person.”

Sutton preaches to always be aware of your surroundings, and for runners especially, always run with one earbud out so you can hear if traffic or trouble may be approaching. He also suggests using the buddy system as there is strength in numbers.