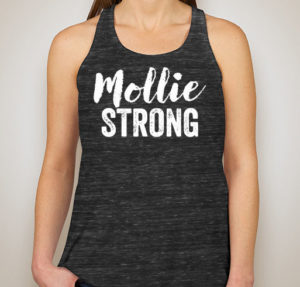 A college student in Omaha who loves to run started a running club on her campus as she didn’t feel safe running alone after Iowan Mollie Tibbetts vanished.

Ashley Tagart, a sophomore at the College of Saint Mary, says she’d just gotten home from a run in mid-July when her dad told her the news about Tibbetts disappearing after she went for a jog. “I didn’t think anything of it and I was like, ‘It’s fine, I’ll just bring my mace,’ but then I noticed I kept looking over my shoulder a lot more and it started to feel more real,” Tagart says. “She wasn’t getting found and it started to scare me even more, so I tried apps that showed my location and I’d share it with my family and I still wasn’t feeling safe.”

Tagart and other club members launched an online campaign to sell t-shirts in honor of Tibbetts, the University of Iowa student from Brooklyn, Iowa, who authorities now say was murdered. “It’s a black tank top. We also have blue and pink and also t-shirts for men. It says ‘Mollie Strong’ on the front,” Tagart says. “It’s to bring awareness that we can all still keep running. We just have to do it safer.”

The shirts cost $20 with a sales goal of 50 shirts. Tagart says they won’t make a dime from the shirts as all proceeds will be sent to Tibbetts’ mother, Laura Calderwood. Many of the running club members share the feeling “that could have been me,” so Tagart says they’ve learned to run smarter.

“At least find one person to run with,” Tagart says. “If that’s impossible for you, get one of the apps that share your location. Tell someone before and after when you’re running. Also, change up your route every once in a while because if you stay with the same route at the same time, that’s when predators can easily find you.” Tagart, a Grand Island native who’s majoring in nursing and forensic science, says she’s getting in better physical shape in addition to being more motivated by her new clan of fellow runners.