You are here: Home / News / Lives of the late Leonard and Dody Boswell celebrated in Lamoni 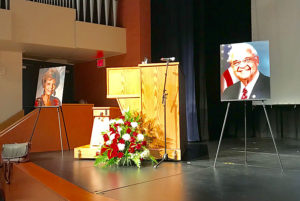 Pictures of Leonard and Dody Boswell were set up for the funeral.

Eighty-four-year-old Leonard Boswell died August 17 after a long battle with a rare form of cancer. His 82-year-old wife, Dody — a retired teacher, died early Saturday morning after a prolonged illness.

“Dody and Leonard couldn’t bear to be apart more than a week,” State Representative Scott Ourth, a presiding elder in the Community of Christ Church, said to open the funeral for the couple.

The Boswells were active members of the Community of Christ Church in Lamoni and Leonard Boswell served as the lay pastor for the church for more than a decade. Several hundred gathered in an auditorium on the Graceland University campus in Lamoni late Saturday morning for a service honoring the couple.

“It’s rather poignant that we would have this here,” Ourth said. “Leonard and Dody met on this campus. They fell in love here. They carved their names out on the north wall of the Administration Building when they decided to get married, which is a tradition around this place.” 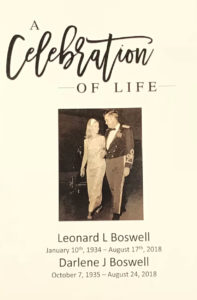 Dody Boswell had been hospitalized earlier this month. Former Senator Tom Harkin, one of the eulogists, noted that when Leonard Boswell was flown from Lamoni to the same Des Moines hospital, the couple was reunited.

“They brought Dody into the room with Leonard and she reached over and grabbed his hand. She knew that he was going to go,” Harkin said. “After Leonard passed, Dody was heard saying in a sort of subconscious realm: ‘I’ve got to find Daddy.’ She knew that Leonard was gone and she had to be with him.”

Retired Colonel Charlie Teague, like Boswell, was the pilot and commander of an attack helicopter unit in Vietnam. He also paid tribute to his long-time friend with a eulogy. Teague brought up a mission Boswell was assigned in February of 1969 — spraying the chemical known as “Agent Orange” from his helicopter.

“Every man in that aircraft was soaked, saturated with Agent Orange. The strange but true fact is that Leonard Boswell was mortally wounded by the spray from that aircraft on that occasions,” Teague said, haltingly, as he was nearly overcome with emotion. “Even though his wound was fatal, it did not take his life until this month.”

After retiring from the military, Boswell took up farming in southern Iowa. Boswell, a Democrat, served a dozen years in the state senate and 16 years in the U.S. House of Representatives. He recently helped former Republican Governor Terry Branstad establish the state’s “Home Base Iowa” initiative and served on the Iowa Department of Transportation Commission.

The eulogists, including his daughter Cindy Boswell Brown, praised Boswell as a military hero awarded two distinguished flying cross and as a peacemaker who, as a politician, sought bipartisan action. Harkin noted Boswell was a fine auctioneer, too. 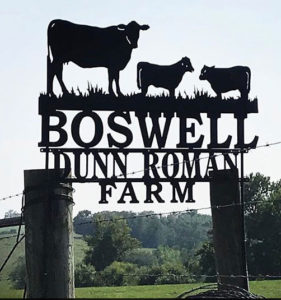 “I think our political party will miss his ability to raise money at events by auctioning off worthless pieces of junk,” Harkin said and the congregation laughed.

Boswell once sold the cheap tie Harkin was wearing at a party banquet for $250.

Leonard and Dody Boswell were married nearly 63 years. The tenants of the couple’s Christian faith were emphasized at their funeral. Dody Boswell’s sister sang an African American spiritual in tribute. Two Iowa National Guard helicopters flew in formation over the Lamoni cemetery Saturday for the couple’s burial, then the family hosted a celebration at the Boswell farm near Davis City.

Republican Governor Kim Reynolds and Congressman David Young, a Republican who represents the district Boswell once served, attended Saturday’s funeral, as did former Democratic Congressmen Neal Smith and Bruce Braley as well as current Congressman Dave Loebsack, a Democrat from Iowa City. Several state senators who served in the Iowa legislature with Boswell attended as well.