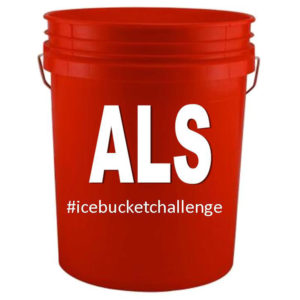 The Ice Bucket Challenge of 2014 went viral and raised more than $100 million for ALS research, but there’s still no treatment or cure for that disease.

Lauren Reinhard, spokeswoman for the Iowa Chapter of the ALS Association, says today’s “Bucket The Boss” event will be held in downtown Des Moines at Cowles Commons. “It’s paved and it has a lush garden around it and there’s a fountain that shoots up out of the ground,” Reinhard says. “What we’re going to do is have the bosses walk right into the fountain right before it gets turned on for the day and they’ll be right on top of it and be sprayed with lots of water.”

The heads of companies from across Iowa — CEOs, presidents, board members and upper level managers — were invited to take part in this follow-up event to the Ice Bucket Challenge. Reinhard says, “We had all different bosses get nominated by their employees and then the employees fundraised to be able to go and watch their bosses get soaked.” The event is scheduled to take place at 11 a.m. Four walk events, called Walk to Defeat ALS, are planned in Iowa this year, September 16th in Sioux City, September 23rd in Cedar Rapids and October 6th in Des Moines. The Davenport walk was held last weekend.

As part of the 2014 Ice Bucket Challenge, thousands of Iowans dumped buckets of ice water on their heads while challenging others to do the same thing in addition to making a donation. Videos of the acts went viral and even then-Governor Branstad got drenched while making a pledge. Thanks to social media, it raised $350,000 in Iowa that year and more than $115 million globally. ALS is a relatively rare disease that only afflicts about 250 Iowans. Also known as Lou Gehrig’s disease, ALS stands for Amyotrophic Lateral Sclerosis. It’s a motor neuron disease which usually attacks both upper and lower motor neurons and causes degeneration throughout the brain and spinal cord. Once diagnosed, life expectancy is usually only two-to-five years.